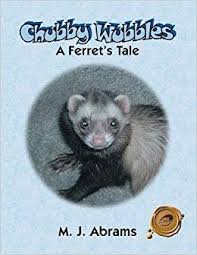 A delightful story about the adventures of a young man and a mischievous ferret awaits in Chubby Wubbles! This vibrant picture book tells a compelling story about the bond that develops between them. As the story unfolds, their loneliness leads to a fateful meeting and a growing friendship. Together they embark on an exciting journey that progresses with lots of humor, fun, and unexpected drama along the way. Chubby Wubbles will warm the hearts of children everywhere!

After being an observer and non-pet owner, I was thrown into the mix because my son was leaving and I couldn't bear the thought of him having to give up his pet ferret to someone else. Since I've grown so attached to this lovable critter, I agreed to take care of him while he was away. Because of the many experiences my son has had with this adorably sweet animal, I decided to write a children's book based on a true story about their adventures and misadventures. 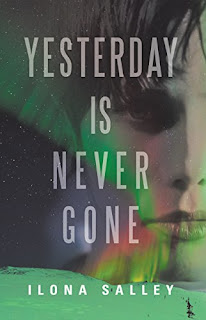 Title: Yesterday is Never Gone
Author: Ilona Sally
Publisher: iUniverse
Genre: Thriller/Crime
Format: Ebook
Niki is no stranger to horrific personal challenges. As a child, she bravely endured abandonment by her father. While in her teens, she witnessed her mother’s murder and the abduction and presumed death of her only sibling. Although her secrets have always been carefully cloaked from others, they have shaped her personality more than she would like to admit. But with a past as terrible as hers, how can Niki ever hope for a bright future? Years later, Niki is a dedicated profiler in a criminal investigation agency with no idea her life is about to change exponentially. One day, through a quirky twist of fate, she receives startling news that her sister, Inge, is alive. As a driving force compels Niki to search for her, she embarks on a quest that takes her through cities and wilderness on two continents. She encounters difficult decisions, threatening mobsters, near-death experiences, and romance, yet nothing deters her from reaching her goal—not even a gruesome discovery about her father. But Niki is about to discover that things are never what they seem to be. In this thrilling tale, deception and inner turmoil hamper a young woman’s journey toward a new reality as she attempts to reconcile her past and find the truth.

I went to your website and see that you are not particularly interested in thrillers, however, I would like you to consider what my book has to offer. First, be aware that it received an Editor’s Choice Award.
The story line is fast-paced and adventurous, moving from Europe to Canada. There are current social issues in the book, notably the problems of smuggling, human trafficking and drug use. The characters are interesting and strong, are often conflicted by moral issues, and two of them have psychological anomalies which are well-developed. In addition, a lot of ‘real news’ items help to move the plot along, and allow for more thought on the issues.
Here then, is my article.
YESTERDAY IS NEVER GONE by Ilona Salley/ Available on Amazon and at www.iuniverse.com
In the book, Yesterday Is Never Gone, strong and interesting characters move the plot along, some sympathetic, and some dangerous. Two of them have truly overpowering psychological anomalies. During her quest to find her sister who had been presumed dead, Niki, the heroine, encounters difficult decisions, threatening mobsters, near-death experiences, and romance. Yet nothing deters her from reaching her goal - not even a gruesome discovery about her father.
Throughout this thrilling tale, deception and inner turmoil hamper Niki’s quest to find her sister. And she learns that things are not always what they appear to be.
But the story does not limit itself to the plot and characters. Current social issues, notably the problems of smuggling, human trafficking and drug use are explored. In addition, many ‘real news’ stories like those of the sinking of The Estonia, the discovery of the mummy of Ramses II, or the horrific story of ninos robados add interest and offer an opportunity for reflection and research.

Ilona Salley emigrated from Germany to Toronto, Canada, with her family when she was three. Throughout her life, her interests have included squash, skiing, wood carving, literature, art, and languages. Her fascination with architecture and archaeology has led her to travel in search of ancient places and artifacts. After a long career as an educator, she expanded her horizons by teaching in England and China. Now, she spends part of each year in Fort Myers, Florida.
at 5:53:00 AM No comments: 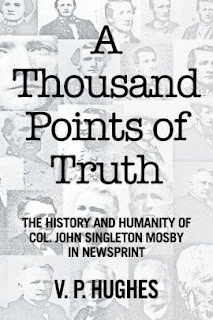 My interest in Colonel John Singleton Mosby began in 1950 However it wasn t until 2002 that it led to extensive research on the subject centered upon newspaper reports on the man begun during the Civil War and continued throughout and even after his life And while I rejected Virgil Carrington Jones s observation on Mosby contained in the preface of this work I did not contemplate writing this book until an even more disparaging observation came to my attention during my research The comment was contained in an article in the Ponchatoula Times of May 26 1963 as part of a six article series written by Bernard Vincent McMahon entitled The Gray Ghost of the Confederacy Mr McMahon in turn based his comment upon General Omar Bradley s judgment of what might have been the postwar life of General George Patton Now substitute Mosby for General Patton in the book A General s Life by Omar Bradley I believe it was better for General Patton Mosby and his professional reputation that he died when he did He would have gone into retirement hungering for the old limelight beyond doubt indiscreetly sounding off on any subject anytime any place In time he would have become a boring parody of himself a decrepit bitter pitiful figure unwittingly debasing the legend emphasis mine McMahon however only proffered in his writings the widely accepted view of John Mosby held by many if not most However like General Ulysses S Grant I have come to know Colonel Mosby rather more intimately through the testimony of countless witnesses over a span of 150 years and I believe that it is time for those who deeply respect John Mosby the soldier to now also respect John Mosby the man A century ago the book of John Singleton Mosby s life closed It is my hope that this book will validate the claim he made during that life that he would be vindicated by time V P Hughes,

For many years, V. P. Hughes has been drawn to certain historical figures whom she researched at great length and in considerable depth regarding not only the person of interest but the period in which that individual lived and his influence upon it. Over the years, she has studied such heroes as Sir William Marshal (1147-1219), Sir Harry (Hotspur) Percy (1364-1403), Admiral Horatio Nelson (1758-1805), John Churchill, First Duke of Marlborough (1650-1722), Sir William Wallace (1270-1305), Francis Marion (1732-1795) and the legendary figures William Tell and Robin Hood. The last three were of especial interest because they, with their few followers, engaged the most powerful armies of the time-and prevailed. Of course, John Singleton Mosby was another such champion-a man who defeated his adversaries with cunning and courage rather than brute military force. Yet Mosby became an even greater curiosity when during her research the author discovered that he had died twenty-five years to the day and hour of her own birth-May 30th, 9 a.m, 1916 and 1941 respectively. Although acknowledged as a mere coincidence, however curious, Mosby’s unique style of warfare and his astonishing success under the circumstances extant, made him of especial interest. Early on, her knowledge of the man centered around the Civil War, but then, copious written works as well as the opinions of past and present day Mosby sages brought to light his post-war life in a manner that seemingly disparaged and negated all the glories that had gone before. Finding this both troubling and unacceptable, when the opportunity arose to refute these calumnies and slanders, the author felt obligated to undertake what is, in essence, a posthumous defense of the man. It is hoped that this unique work will achieve the goal of undoing a great injustice and restoring to a noble American hero the respect and admiration he so richly deserves.