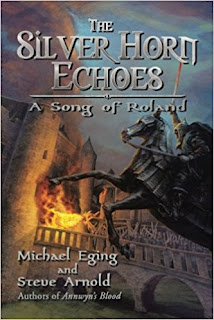 As the Frank kingdom prepares for war, Roland, young heir to the Breton March, has been relegated to guard duty until a foreign emissary entrusts him with vital word of a new threat to the kingdom. Now Roland must embark on a risky journey to save all he loves from swift destruction.

And yet while facing down merciless enemies, he must also reveal the hand of a murderer who even now stalks the halls of power and threatens to pull apart a kingdom reborn under the greatest of medieval kings, the remarkable Charlemagne.

For Roland to become the champion his kingdom needs, he must survive war, intrigue and betrayal. The Silver Horn Echoes pays homage to "La Chanson de Roland" by revisiting an age of intrigue and honor, and a fateful decision in the shadows of a lonely mountain pass—Roncevaux!

Thursday, November 23
As the Pages Turn
The Revolving Bookshelf

Friday, December 1
Review From Here
A Taste of My Mind
A Book Lover
My Bookish Pleasures 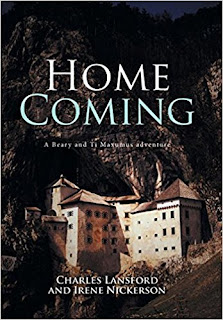 Title: Home Coming
Author: Charles Lansford and Irene Nickerson
Publisher: XLibrisUS
Genre: Coming of Age
Format: Ebook
Homecoming is that surreal feeling that a soldier has when he has returned home. For our heroes, each is facing new challenges, hopes, and fears. Ti is worried about what the shape-shifter major told him. He wonders what other secrets might be hiding in the shadows and what dangers they might hold for his family. Beary and Crew have returned home to build a new warship to face the growing threat to the Bearilian Federation. It is one that is pointed directly at his family like a dagger to his throat. Angelina and Octavious have discovered that old enemies have joined in the vendetta against their family. Old secrets may surface. Old threats may appear. All the pieces are now in place. It has been a month since everyone has returned. 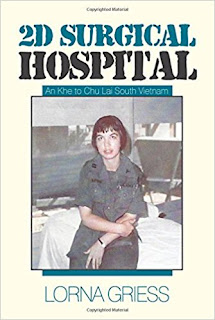 Title: 2D Surgical Hospital
Author: Lorna Griess
Publisher: XLibrisUS
Genre: Military Biography
Format: Ebook
This book is about living and working in a mobile army surgical hospital (MASH) in South Vietnam. It talks about the hospital itself, the setting, how we lived, how we coped with less-than-good circumstances, the type of patients we received, the equipment we worked with, and the emotional highs and lows that were part of every day. The stories are true. Some of the dates and numbers of things may be off a little; that was a long time ago. Names have not been used to protect the wonderful, dedicated people with whom I worked and lived with.

Lorna Griess made the Army Nurse Corps her career after her tour in Vietnam. She served in hospitals worldwide for almost thirty years. She retired as a full colonel and chief nurse at Letterman Army Medical Center on the Presidio in San Francisco (now closed). Fully retired from nursing, she joined the Military Officers Association of America, California Council of Chapters, and became their legislative liaison. She serves as a veterans’ advocate in the California State Legislature. She is a member of several other veterans’ organizations including Vietnam Veterans, AMVETS, and VFW. She writes articles, reporting on current legislation for local newsletters. For relaxation, she has become an artist. Her oil paintings have been on display at several galleries around Sacramento, including the Crocker Art Gallery.

Book Feature: Everything You Need to Know About Camping and RV'ing by Ghislaine Bourdon 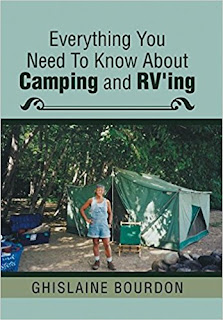 Title: Everything You Need to Know about Camping and RV'ing
Author: Ghislaine Bourdon
Publisher: XLibrisUS
Genre: Sports & Recreation/Camping
Format: Ebook
These are informative and entertaining lessons that teach the ways and etiquette of camping that will lead to a more relaxed and enjoyable vacation for everyone. Learn to organize, plan, and prepare with eagerness and excitement.

Camping is fun for everyone especially if you know how to do it right! Let me guide you to your greatest adventures.

Ghislaine Bourdon has a bachelor's degree in studio art. She was a swimming instructor for most of her life and taught swimming for the school system in France for many years. Ghislaine bicycled across most of Europe including the Alps alone when she was sixteen years old. She has climbed many mountains and does extensive camping trips. Trying not to be hindered by a past mental illness Ghislaine has overcome many life long difficulties. She is an extremely diversified individual with talents that abound.

Tuesday, November 21
The Hype and the Hoopla
The Revolving Bookshelf

Friday, November 24
From Paperback to Leatherbound
A Title Wave

Thursday, November 30
Confessions of an Eccentric Bookaholic
My Life. One Story at a Time

Interview with Alastair Fraser, author of Forestry Flavours of the Month

Forestry touches on all aspects of human welfare in one way or another, which is why foresters need to play an active role in determining our collective agenda. Alastair Fraser, a lifelong forester and the co-founder of LTS International, a forestry consulting company, explains how forestry changes with political cycles and how foresters can promote healthy forests at all times.

He explores critical issues such as:
• forests and their connection to coal;
• forest's role in combatting floods and climate change;
• illegal logging in Indonesia, Laos, and elsewhere;
• tactics to promote sustainable forestry management;
• plantations as a solution to tropical deforestation.

From pulping in Sweden and Brazil, paper mills in Greece and India, agroforestry in the Philippines, "pink" disease in India and oil bearing trees of Vietnam, no topic is off limits. Based on the author's life as a forester in dozens of countries, this account shows the breadth of forestry and makes a convincing case that forestry management needs to focus on managing change and achieving sustainability. Whether you're preparing to become a forester, already in the field, or involved with conservation, the environment or government, you'll be driven to action with Forestry Flavours of the Month.

Has someone been instrumental in inspiring you to write?

No one in particular, though I was somewhat encouraged by the writing of my grand uncle David Fraser, who was a correspondent for the Times of London newspaper during the first half of the 20th century and wrote a number of books on his travels and experiences

Who is your favorite author? Why?

I don’t have one particular favorite author though I have an eclectic collection of books by many different authors, many of whom I consider to be good writers

What was your first sale as an author?

When in the day/night do you write? How long per day?

I am not a professional writer but generally write during normal working hours fo as long as is needed to complete a chapter.

What is the hardest part of writing your books?

I don’t find it hard to write.

Alastair Fraser is a founder member of the archaeology group No Man s Land. He has worked as researcher and participant in a number of Great War documentaries. Steve Roberts is a retired police officer and an ex-regular soldier. He specialises in researching individuals who served during the war and is also a founder member of No Man s Land. Andrew Robertshaw frequently appears on television as a commentator on battlefield archaeology and the soldier in history, and he has coordinated the work of No Man s Land. His publications include Somme 1 July 1916: Tragedy and Triumph, Digging the Trenches (with David Kenyon) and The Platoon.
at 11:37:00 AM No comments: