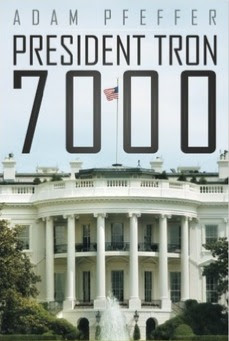 In 2056, androids have become commonplace—so much so that the United States has elected its first android president. President Tron 7000 might be just what the country needs. He knows all the answers and vows to include everyone in his programs for a new America. Not everyone is convinced, however. Aging reporter Hudge Stone believes that the election of an android must be a mistake. Even though the new president has pledged to end nuclear war and provide better education for all, it seems too good to be true. When President Tron is shot by an angry human being, however, all hell breaks loose. Tron declares humans enemies of the state and sets out to exterminate them, calling all other robots to join him. There is little doubt which side is stronger, and only time will tell what the future of the human race will be—whether humans will survive or be made extinct by the machines they have created. In this science fiction novel exploring humanity’s quest for perfection through technology, humans fight to survive against androids determined to destroy them.

Adam Pfeffer was born in Queens, New York, and graduated from the University of California–Los Angeles and the Art Center College of Design in Pasadena, California, with degrees in history and fine arts. He has worked for several newspapers and magazines, as well as publications in Los Angeles, New York, and Washington, DC. This is his sixteenth published work.
at 8:52:00 AM No comments: